On the 8th of June 2022, a reception party was held at GARDE ITALY S.R.L. showroom for the exhibition of the best award-winning works of “ADF Milano Salone Design Award 2022”. The event involved presentations to the Milano Salone jury, national media and other Italian companies. Around 100 people attended in light rain.

The “ADF Milano Salone Design Award” is an international design award for creators and artists from around the world. Organized by NPO Aoyama Design Forum (ADF), it is regarded as a gateway to success for young creators, attracting many entries every year.

The design theme for this year’s “ADF Milano Salone Design Award 2022” is ‘re_’. The evaluation is based on the quality of the design (beauty of form, choice of materials, ease of use and uniqueness), as well as simplicity, functionality and a timeless sense of presence.

The award-winning work of this year’s competition is “The beauty of wasting” by duo artists Lisa Ogawa and Tomomi Kawashima. (Top Image)

According to the judges, it is “(an) inspiring design for sustainable consumables” and “profound work that is not fudged by superficial impressions or played with by ambiguity and elusiveness, but is thoughtful, clear and solid in its answers (…). Not just content with interesting points of view, great ideas and inspiration, but they are incorporated into a beautiful and refined form that encompasses those ideas well”. Especially, “In a time when solutions to climate change are one of the world’s top priorities, it is important to understand that our way of life must change, starting with the way we consume. At the same time, the project encourages a dialogue about each person’s personal history, (…) It is a very simple, beautiful, conceptually strong and very thoughtful design.”

As in previous years, many design professionals and media representatives gathered for the joint exhibition in 2022, which was graced by the works of the Grand Prize winners, Ogawa and Kawashima. It was a meaningful and valuable event, opening up conversations for promising future possibilities.

MIPIM 2022 was held at the Palais des Festivals in Cannes, France, from the 15th to the 18th of March.

MIPIM (Marché International des Professionnels de l’Immobilier) has been held since 1990, and is organized by Reed-Midem of France.

It is one of the world’s largest real estate trade fairs, attracting more than 3,000 exhibitors and 20,000 visitors every year from all over the world, especially from Europe and the Middle East.

It is a place where developers, architects, local governments, investors, and various other players in the real estate business from around the world gather to attract companies and investments, introduce, promote urban development technologies and know-how held by each country, and disseminate information and exchange opinions on real estate investment.

GARDE, which has been incorporated in Italy, participated in the event as a member of CLUB ITALIA for two days on March 16 and 17, giving a presentation at the Italy Pavilion.

The venue was filled with excitement, as this is one of the largest real estate events in the world,having been eagerly awaited since the 2021, the event was forced to be canceled due to Covid-19.

In the Japanese real estate industry, where inbound investment and overseas development of urban development are said to be regaining momentum, participating in the world’s largest real estate event, and interacting with real estate professionals from various countries was extremely valuable, and gave us the confidence to initiate the next phase of development.

Based on examples from Southeast Asia, he explained in detail the elements necessary for offices to “transform from a place of work to a place of communication” from both software and hardware perspectives. As an example, in the design of the Okamura Bangkok office, to respect the identity and values born from the Thai environment and culture.he explained the adoption of “biophilic design”and A monk prays after the office is completed . I was able to hear some very fresh and interesting stories.

On the other hand, Francesco, a designer from GARDE, gave a presentation on “ABW/Agile Working”, which is said to be difficult to promote and spread in Japan after its introduction, under the theme of “Solutions to problems learned from ABW pilots”.

The combination of the pilot project and ABW/Agile working has many advantages even in the midst of uncertainty due to the impact of Corona, such as “the ability to try out scenarios based on various ways of working,” “the ability to make adjustments even in case of failure, and the ability to implement on a relatively small budget,” and “the ability to verify effectiveness and understand problems (PDCA). I also strongly felt that it is something that can be expected to have the potential for unique evolution and development in the future in office design in Japan, where unique cultures and environments still persist. After each company’s presentation, heated cross-talk was exchanged on how to make global standards and local standards coexist.

Through the presentations of the two companies, (1) communication and collaboration spaces will be secured. (2) Provide space (play) that can be adapted to various styles. I felt that the two companies had these things in common. Despite the hour and a half long session, more than 170 people attended, which showed how much attention and importance is being given to creating offices that respond to changes in work styles.

Well, GARDE will be planning and implementing many seminars and events focusing on the web. We also accept requests for our designers to appear in events co-hosted or organized by your company at any time. If you are interested, please contact us!

Milano Salone Internazionale del Mobile held from September 5 to 10, 2021, is said to be the most exciting event in the world of interior design, where manufacturers and designers from all over Europe gather to present the year’s design trends before anyone else.

The event was threatened due to the new coronavirus, but it was held under the condition that the various guidelines to prevent the spread of the virus were followed.

During the event, we had an exhibition at the GARDE Italy office and gave a presentation on our latest achievements, especially on large-scale projects, and more than 100 people from the industry visited the GARDE Italy booth.

At the reception, we had the chance to have a very valuable and meaningful exchange with industry professionals from Japan and abroad over delicious Italian drinks and snacks.

Here are just a few of the highlights of “Milano Salone 2021”.

GARDE Italy booth. We had many visitors come visit.

We introduced the latest achievements of GARDE through panels and monitors.

Every year, during the Salone Internazionale del Mobile, GARDE organizes several events for industry professionals from around the world. Next year, we hope introduce the latest of GARDE to many again.

The first Hankyu Department store in China, Ningbo Hankyu, opened last April 16, 2021. Being one of the projects developed under the Cool Japan Organization, it took four years for the retail outlet to open after various twists and turns since its start in 2017. GARDE was involved in the exterior and interior design of the aforementioned property.

GARDE has been involved in several opening projects, such as the Nishinomiya Hankyu opening in 2008, the Hakata Hankyu in 2011, and the Umeda Main Store in 2012. This time, GARDE has created a new commercial facility based on the concept of “China’s first experiential shopping mall” that combines the strengths of a department store with those of a shopping center. The project has gotten off to a strong start for a large-scale commercial facility, and its attention has grown tremendously. Therefore, in response to an enthusiastic request from within the industry, Hankyu Department Store held a seminar on May 28, 2021, on “Keys to Success in Developing a New Style of Commercial Facility”. The seminar was attended by about 80 people from local department stores and shopping centers, and GARDE, which was involved in the concept work and design of the project, gave a presentation.
Yutaka Yamamoto, the design director, took the stage remotely from Japan. The following is an excerpt of Yamamoto’s speech about the design of Ningbo Hankyu.

• Concept
When we created the concept, we had two major things in mind. The first was to create an oasis where people can gather and spend time comfortably, as Ningbo is a new urban area that will continue to develop. The second is to introduce Japanese content, not simply by expressing traditional Japanese culture as it is, but by incorporating it into a modern design that is sublimated.
The concept that emerged was “J FOREST GARDEN”. The concept is based on three elements: “J Culture” = traditional Japanese culture, “Nature” = nature motifs, and “Modern” = contemporary.

• Floor Expansion
The sales floor area of Ningbo Hankyu is about 2.5 times larger than that of the Umeda flagship store. We paid close attention to the spatial configuration of the entire building so that customers can move around this large sales floor without getting bored.

Since one floor is too spacious, a single worldview may bore customers. Therefore, we divided the space into three zones to create the pleasure of circulation. The central area of each zone has a dynamic ceiling design  unrestricted to the guidelines, emphasizing the changing zones.

Each floor has a different design theme in order to create a space where visitors can enjoy the experience of a different worldview spread vertically. In the central zone, the plaza connected by the atrium between the 2nd and 3rd floor, and the Gyeongjeon Plaza between the 4th and 7th floor, which is the centerpiece of the entire building, are positioned as the central core of a vertical axis. The dome is inspired by the traditional Japanese architectural technique of woodwork and was designed by sublimating the traditional Japanese technique into a modern design. This is the center of the museum, where visitors can relax on the grand staircase and where large-scale events are held to introduce various goods, activities, and cultures from around the world. We designed this dome as a symbolic space in which people gather to see it and have it etched in their memories. 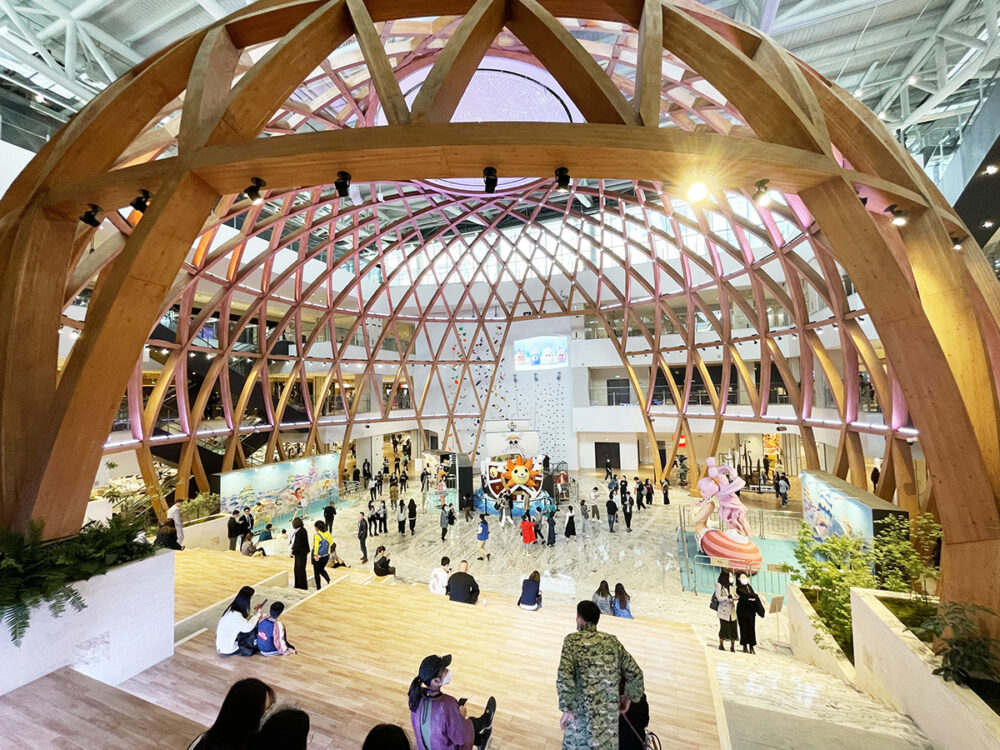 Qingti Plaza in the central zone on the 4th floor

• Exterior Design
The design includes a welcoming entrance, as we wanted to create a striking yet friendly design that conveys the richness of nature and hospitality that is symbolic of J FOREST GARDEN.
The curtain wall of the upper level is based on the image of “water and forest” as its nature-themed, expressing natural and soft streamlines such as flowing water and ridges of mountains showcasing a forest design. The building is also designed to create beautiful shadows using light, making it an iconic landscape of the new city center.
The lower levels are designed to resemble trees in a forest, using branches and leaves as well as a modern stone pattern where the height was adjusted to attract people to the installation. 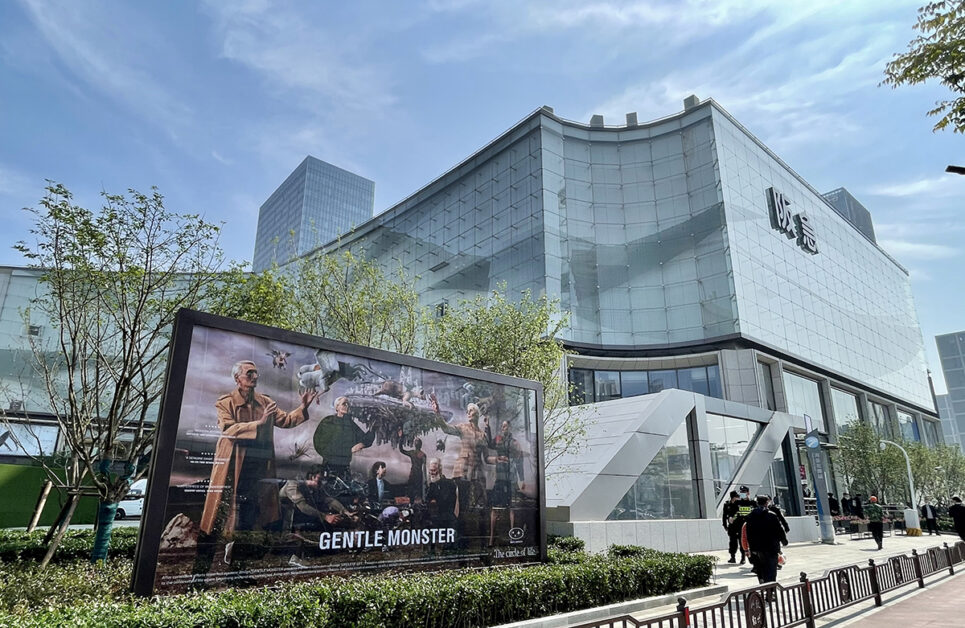 In many ways, this project was the culmination of all of Hankyu Department Store’s design work to date.
Ningbo Hankyu, being born in Ningbo, represented the sublimation of its history and tradition nurtured in Japan and their future is to attract more and more attention from the public.

Design Director
Yutaka Yamamoto
Director, Design Division, Design Department 1
Yutaka Yamamoto is active in the design and direction of large commercial facilities including department stores. He oversaw the design of the sales floor for the Hankyu Umeda Main Store renovation project and the general direction of Nishinomiya Hankyu. He was responsible for the design of the 3rd and 4th floors for the entire renovation of Ginza Mitsukoshi. Overseas, he directed the renovation of the entire DOOTA building in Seoul, the new PARKSON Johor Bahru store, etc. In 2019, his project was the watch section on the 5th floor of Isetan Shinjuku. Yutaka Yamamoto is also the general design director of Ningbo Hankyu, which opened in 2021, and has extensive experience in designing large commercial facilities in Japan and overseas.